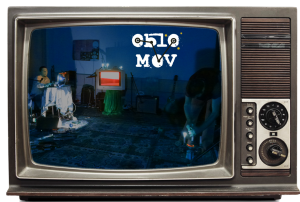 Sick from cold and boring afternoons in St. Petersburg spent watching television, too many perhaps, the Italo/Russians Oblomov, Ilja Ilic and trusted Zachar, decided to devote themselves to music, stealing from the road and from the network sounds and noises, hints and narrations, mixing the nothing to the superfluous. They use old equipment such as radios, televisions and record players, game consoles, camp stoves, all ready to infiltrate the sounds and become music themselves. 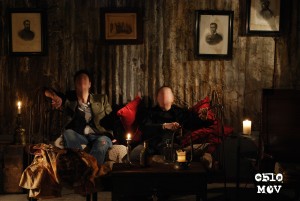 Grown up in a remote province, among the habits and the kind and gentle customs of his homeland, after spending twenty years jumping from a relatives’ embrace to another, friends and acquaintances, it was fair to imagine that the future use of Ilja Ilic should be a kind of family occupation. He thought  that attending the workplace was not a habit at all mandatory, which was necessary to follow every day, and the mud, the heat, or just a bad moon were sufficient and legitimate excuses for not going to the office. How bad he felt when he saw that it took at least an earthquake because a clerk in good health did not go to the office, and in St. Petersburg, by sheer coincidence, no earthquake ever gets by. All this had caused him a feeling of fear and great discomfort.

“But when you can live? When?” he repeated to Zachar. 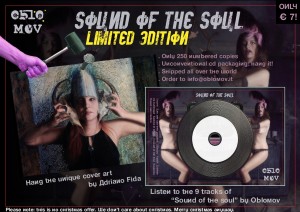 For some years now Oblomov have been roaming around Europe, after a hen had sung, back in the beloved Oblomovka, with the verse of the cock, and a raven had croaked on the roof. One year here, six months there, Paris, Hamburg, Vienna, the French Riviera, at the whim of Ilja Ilic. They are currently in Italy because, according to the TV, it is a country where you can just walk around, with no worries or troubles. From a collaboration with the Italian painter Adriano Fida, Oblomov get interested in the theme of “universal myths”. This gives life to a project in which all forms of art and indolence, are welcome. Their first album, “Sound of the soul”, is now available in a numbered Limited Edition. Follow us on facebook to stay tuned.